Skip to content
Home
Travel
What does a 3% patch mean?

Riding a bike can be really fun but whilst you might think that bike is used only for traveling from one place to the other, there are many people out there who ride their bikes as part of leisure activity. Bike riding has become a very popular activity among people. Bikers have not only made it their hobby, but some are so dedicated that they have made it their life’s mission to travel to a certain town, city, or country just on their bike. These dedicated and bike-loving individuals are the ones who are usually parts of their local or some world-renowned biker’s club.

Bikers are often seen wearing biker patches but what do these patches actually represent? The representation of the patches varies from one patch to the other, but a patch is usually worn by a person who is a member of a dedicated motorcycle club. This gives a form of a message to the people that a certain individual belongs to a certain club. These patches are placed by the bikers often at the back of their vest and are worn with pride since they represent meaning, culture, and tradition.

It is important to be noted that in the world of motorcycles and motorcycle clubs, there are many patches that can be worn by different motorcyclists throughout the world. The most interesting and common of which is the 3% three-piece back patch. 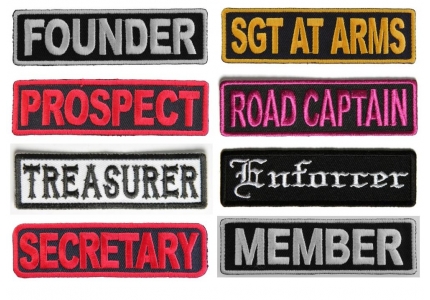